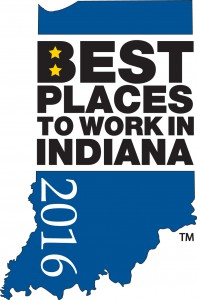 (INDIANAPOLIS) — United Leasing & Finance was among the group of small companies that lead the way on the 2016 Best Places to Work in Indiana list, with nearly half (48) of the 100 honorees coming from that category. The Indiana Chamber of Commerce stated that over a quarter (27) of the honorees are making their debut or returning to the list after at least a year’s absence.

“The companies selected represent some of our most outstanding Hoosier employers. They embrace the idea that a positive work culture that includes respect, communication, opportunity and being part of a team not only makes it a place in which employees want to work but also fuels the success of the company,” states Indiana Chamber President Kevin Brinegar.

“We had our highest number of applicants to date this time – 200 in total,” he relays. “It’s becoming more competitive and we are glad to see that. Going forward, we will continue to push for Hoosier businesses throughout the state to apply to be considered.”

The actual rankings for the companies will be unveiled at a May 5 awards dinner, presented in partnership with Hylant, at the Indiana Convention Center (Sagamore Ballroom) in downtown Indianapolis.

These top companies in the state were determined through employer reports and comprehensive employee surveys. The Best Companies Group, which handled the selection process, oversees similar programs in 27 other states.

Organizations on this year’s list that have displayed sustained excellence during the program’s 11-year history received additional recognition.

Hall of Fame companies are those that have been named a Best Place to Work in Indiana at least two-thirds of the time in the program’s history; a total of 14 organizations on the 2016 list meet that criteria. The Pinnacle designation is reserved for those that have finished first in their category three or more times in a five-year period.

In addition to the May 5 awards dinner, winners will be recognized via a special section of the Indiana Chamber’s bimonthly BizVoice® magazine and through Inside INdiana Business with Gerry Dick – both of which reach statewide audiences.

All companies that participated in the 2016 Best Places to Work program receive an in-depth evaluation identifying strengths and weaknesses according to their employees. In turn, this report can be used in developing or enhancing employee retention and recruitment programs.

For more information on the Best Places to Work program, go to www.bestplacestoworkIN.com.