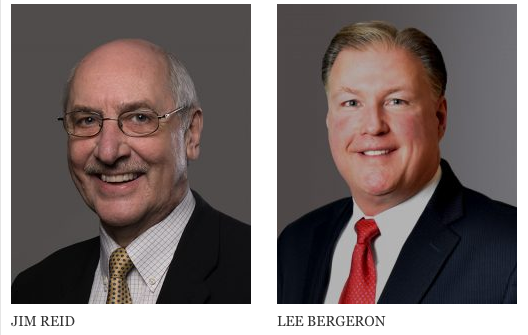 Vice President and Chief Operating Officer, Martha Ahlers recently announced new leadership roles within the organization for two highly successful executives in the financing industry. Mr. Lee Bergeron joins ULF in the role of Vice President of Sales and Mr. Jim Reid assumes a newly formed position as Director of Syndication. “We are very fortunate to have the high caliber of leadership and successful track records of Lee and Jim in our organization. They are industry experts possessing tremendous professional credentials who will lead ULF to new levels of growth and profitability,” stated Ahlers. In leading the ULF sales team, Mr. Bergeron brings an extensive background in financial services, commercial equipment leasing and commercial lending, having spent the majority of his career with General Electric (GE.) He began as a Sr. Account Executive and took on roles of increasing responsibility over the years to include key Senior Executive responsibilities in GE’s Commercial Finance and Leasing sectors. His strategic leadership and tactical expertise have consistently delivered profitable business growth results in both sales and revenue. Lee earned a BBA in Marketing from Texas Christian University; possesses a Six Sigma Green Belt certification; is a member of ELFA and AGLA; and is a graduate of GE’s Core Leadership Training program that is renowned for leadership development, innovation and sales management. The Bergeron family will be relocating to Evansville, IN from Newtown, CT. Mr. Reid has been employed with ULF since January of 2013, serving as the Director of Business Development. In his new role of Director of Syndication, he will utilize his extensive industry experience and network to focus efforts on expanding relationships with key syndication partners as well as identifying new niche opportunities. Possessing more than 30 years of equipment leasing experience, Mr. Reid has previous senior sales and business development roles with Leasing Group Inc., Sony Financial Services, Heller Financial and Dana Commercial Credit. Jim hails from the United Kingdom and relocated to the United States in 1997. He will perform his new ULF duties from Austin, TX. “I am very excited to have both Lee and Jim on our team,” stated Ahlers. “They are talented individuals of high integrity who will take the company to historic levels of success.” United Companies is a privately owned corporation founded in 1964 and is headquartered in Evansville, Indiana. It is comprised of United Leasing and Finance, Professional Transportation, Inc. and the Romain Automotive Group. The collective operations have successfully managed and sustained business growth to become a multifaceted financial and transportation services organization with more than 3,000 corporate accounts. With over 6,100 associates, United Companies has direct operations in 40 states and the District of Columbia, while managing assets in all 50 states, Canada and Mexico. Since inception, this diverse enterprise has systematically built upon its foundation of customer focus, innovative financing structures, and superior service, all being supported by the reputation and integrity of an exceptional workforce.