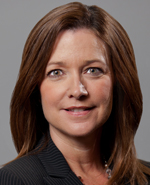 Evansville, IN – Martha Ahlers, Vice President and Chief Operating Officer of United Leasing & Finance (ULI) was officially appointed as Vice Chairman of the 2016 Equipment Leasing and Finance Association (ELFA) Board of Directors. This appointment was recently decided during the ELFA election for the 2016 Officers and Board of Directors.

Mrs. Ahlers, who started with ULI in 1996, stated she “appreciates the opportunity to serve as Vice-Chairman for the ELFA Board of Directors and is eager to assist the organization with her industry knowledge and expertise.” Mrs. Ahlers has over 20 years of progressive commercial leasing experience and holds a Bachelor’s Degree in Economics from the University of Illinois. Mrs. Ahlers resides in Evansville with her husband, Jeff, and son, Nick.

ELFA represents more than 575 member companies, including many of the nation’s largest financial services companies and manufacturers, as well as regional and community banks and independent medium and small finance companies throughout the country.

ELFA membership also includes a number of multinational financial and manufacturing companies operating in the U.S. The clients of ELFA members range from Fortune 100 companies to small and medium sized enterprises to governments and non-profits. Visit ELFA Website

Founded in 1964, United Companies is a privately owned corporation headquartered in Evansville, Ind. It is comprised of United Leasing & Finance, Professional Transportation, Inc. and the Romain Automotive Group. United Companies has evolved into a multifaceted financial and transportation services organization with more than 3,000 corporate accounts. With more than 7,200 associates, United Companies has direct operations in 40 states and the District of Columbia and manages assets in all 50 states, Canada and Mexico. The collective organization is a uniquely different enterprise by its customer focus, innovative financing structures and superior service, all supported by the reputation and integrity of our people. For additional company information please visit United Companies Website.